A new series – I’ve also written a  contemporary romance set in New York City called Sorry Charlee. This book will tentatively be part The Urban Series. I hope to sell this one to a publisher. Book two is also written, but needs edited. Still undecided on what to do with it…

This first story came out of nowhere and I’m super excited about it. Tentatively titled The Geek Gets the Girl, this story is ready to go. Book two is written, needs editing of course.

The Morrison Family Series – Book 15, Nerds in Danger – dropped October 16, 20. These stories blend together with The Nerd Who Spied Me, Baking with Nerds, and Nerds in Harmony. Book 16, Nerds in Force, is available as of October 2021.

This new paranormal series features gargoyles. The first book is called Blown Away. It’s written and mostly edited, and I’ve started the second book in the series, Fired Up. Both of these books will be part of a series I’m tentatively calling Gargoyles Unlimited. However, a bunch of other projects keep crowding in… so this series is on the back burner for now.

I have another new paranormal series with a written first book. I wrote it last fall and it needs editing. This is an exciting one with characters I’ve really enjoyed. I have to see if the next book in the series makes itself known so I’ll know if it’s a viable series. 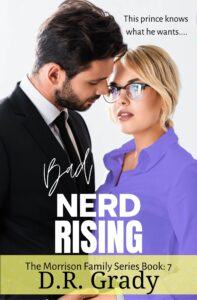