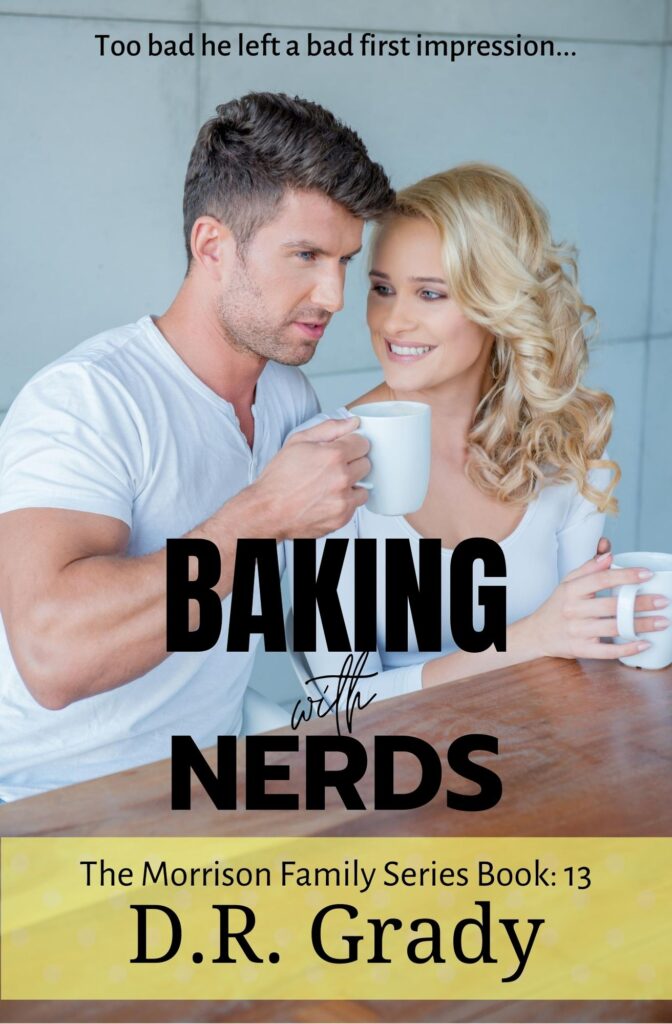 Part of the The Morrison Family Series series:
View on Goodreads

Baking with Nerds is Ainsley Morrison and that cranky former Marine, Brett Bentwater’s book. Brett is honorably discharged from the military—a fate worse than death—due to a PTSD diagnosis. He’s returned to civilian life with some major baggage. Meanwhile Ainsley, with the aid of her cousin, is suddenly thrust into opening a much needed coffeehouse in town. With his baggage and her new business they don’t have time to fall in love. Or do they?

Ainsley Morrison pursed her lips. She no basis for dealing with her current situation.

Brett Bentwater, the former Marine who had moved into Sara Newton’s apartment, Ainsley’s best friend, was nothing like sweet, personable Sara. This imposing, scowling man couldn’t be further from the petite blonde who Ainsley missed so much there weren’t words.

Ainsley’s brother, Clay Morrison, had coaxed her into introducing herself to the man.

She had been willing to be friendly.

The nearly snarling man in front of her didn’t appear to appreciate this fact.

He also didn’t seem impressed with the brownies she’d made for him as a house warming gift. The ones she’d labored over for days. After a few experiments, this recipe was perfect.

Even she, her worst critic, hadn’t had a bad thing to say about the resulting product.

Most people lit up at the appearance of a homemade baked good. Not Brett Bentwater.

“Thanks.” His rusty voice sounded as though it hadn’t been used in a while. He cleared his throat and indicated the disposable container she used to bake the brownies.

“You’re welcome. Hope you enjoy them.” Although she had to admit to some dubiousness of this man enjoying anything. “Welcome to Hershey.”

He nodded, his lips thin, nostrils close to flaring. As though the very sight of her made him long to trample her into the nondescript carpet lining the hallway.

She rubbed her moist palm as unobtrusively as possible across the fall-appropriate material of her long skirt. Then fiddled with the hem of her sweater. “Okay… well.”

The ding of the elevator made her jump. A woman exited the car and paused outside a door near the stairs. It didn’t take her long to unlock the barrier, and she soon disappeared inside.

The elevator signal had never startled Ainsley before. So what was the big deal? She breathed deeply until her heartbeat settled.

Brett’s unblinking eyes narrowed on her. He didn’t say anything. His cold perusal didn’t give her a case of the heebie-jeebies. It should give her the creeps. The reason why his coldness didn’t freak her out finally popped into her head.

“You remind me a lot of my brother when he first retired from the service.”

“Your brother was in the service?” His hand tightened on the disposable container. It creaked in protest.

“He was an Army Ranger.”

This appeared to impress him. For a nanosecond. “Knew some Rangers.” He must not subscribe to the Marine-Army Ranger rivalry.

Brett’s baritone voice sent a shivery sensation down her spine. The consequence wasn’t uncomfortable, not entirely. Ainsley still didn’t care to repeat the experience. She rubbed the back of her neck, before offering a fleeting smile.

“Why did you come?” He didn’t bother to hide his suspicion. At least it didn’t sound as though he made an effort.

Her spine went rigid. “Because my cousin’s husband, Mitch Monahan, a former Marine, and my Army Ranger brother, insisted.”

If she spat what she was really thinking, she’d disappoint her grandfather. Disappointing Granddad wasn’t her favorite thing to do. It ranked near the bottom of her least Favorite Things To Do list. And yes, she did keep such a list. In a mental file in her brain, but this list did exist. Ainsley preferred organization over chaos.

“I’ve met Mitch once or twice.”

Ainsley eyed the man looming in the doorway of Sara’s old apartment. “He’s married to one of my cousins.”

His shrug couldn’t have been more casual. “Thank you.” He waved the brownie pan, stepped back into the apartment, and shut the door.

She gaped at the closed door, before remembering there was a peep hole. Stepping away from the door, Ainsley grappled with the entire interaction.

Had she been rude? Had she said something inappropriate?

Maybe she’d been too chirpy. Her heart dropped. That possibility remained all too realistic. Sara, once when Ainsley had pressed, admitted that Ainsley tended toward chirpy. Her best friend had hastened to reassure that she liked chirpy. Some people, on the other hand, hated chirpy people.

Brett Bentwater, surly former Marine, must fall within that category. The man could scare off a grizzly with porcupine quills in his bottom. Not that she in any way resembled a grizzly bear. From what she understood, they didn’t chirp.

It was too bad he didn’t like happy people.

Being a Morrison, she was well loved, and she possessed the usual blue-green eyes most of the family sported. Also, as a Morrison, at least her branch of the family, she tended toward the tall end of things. She was statuesque, as her mother preferred to call it, and carried ten extra pounds, probably due to her profession as a chef and pastry artist, with light brown hair and her Morrison family eyes. Nothing special.

Of course, a man who bordered on handsome wouldn’t notice her. Of a size with Mitch and Clay, Brett could also hold his own with those gray eyes and black hair. She happened to like a little beard stubble and flat stomachs. But she drew the line at cranky.

No one wanted to live with a cranky pants.

Brushing off her hands, both physically and philosophically, she had done what was asked of her. Never again did she have to deal with Brett Bentwater. 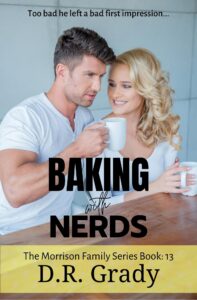