My stories are all heartwarming, sweet, community based romance books.

Emma the Petite might be small, but she is all Aasguard. An experienced warrior of over a thousand years she is confident in her abilities. She fools herself into believing the only thing she lacks is knowledge of her family history.

Mozark is a mage feeling his long years. He has traveled the land for over a millennium learning about other places and cultures. He is seeking a home but fears the urge to move on will triumph. Soon Emma and Mozark realize they have missed a few critical things. Such as Emma has an unknown family member who needs her dead so he can be the legendary Heir. Emma and Mozark also develop feelings for each other. But an Aasguard and a mage cannot marry. Or can they?

The Dragon Chronicles are here again. Check them out! 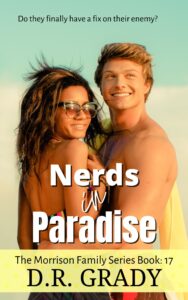 Intense Eric Monnette can’t get skilled Riley D’Arpino out of his mind. He’s a retired Navy SEAL who uses his skills to keep people safe. Except unanswered questions from his past has placed him in jeopardy himself.

Computer nerd Riley is set to retire from the US Army in three weeks. She has civilian life to figure out. She doesn’t need her childhood crush riding to her and her commanding officer’s rescue.

Okay, so said commanding officer took a couple bullets and their boat sank. Now they’re facing near hurricane conditions, a stormy sea, limited fuel, and her commanding officer is going to die if they don’t hustle him to safety soon. Oh, and then there are the bad guys who very much want to silence them. Permanently. Falling in love is certainly not on the agenda.

The Geek Gets the Girl

A geeky R&D director asks the reigning sales queen on a date and they’re both shocked when she accepts.

Things go swell for a few euphoric weeks. She meets his cat, he meets her friends, and they contemplate meeting the parents. Then their boss casually mentions that they should both apply for a new vice president job.

Nick and Alexis have to decide between their precious new relationship or their dream job.

***This story has a HEA and is the first book in a geeky series. A romantic comedy that’s clean, but sensual enough for all the feels. If you like your men with glasses and big brains, then this series is for you!

Fergus the First was the oldest Aasguard warrior and is presumed dead. Only he’s very much alive and has met his mate, Lucy the Lucky. The only problem with finding his mate now is after a vicious attack, his legs are paralyzed. A warrior who cannot walk or stand to fight… are they even a warrior?

Lucy the Lucky had not counted on the stubbornness of her mate. His focus on his inabilities have blinded him to the endless possibilities of their future. If he cannot see that his experience and knowledge are far more valuable than his legs she wonders if they can have a relationship.

He has a choice. He can overcome this obstacle or allow his paralysis to end their union before it even begins. Will his stubbornness be their end?

This is a standalone story that is part of a larger series. They are more enjoyable if read in order but can be read in the sequence you prefer.

Determined Harlow Maxwell is on a mission. She’s not about to allow anyone, even massive, sweet Keith Monnette to hinder her progress. He might curl her toes and make her long for things she’s never had, but she has a serious job to do and she can’t afford any distractions.

No matter how gorgeous he is.

Army veteran Keith Monnette left the military to protect his family from the evil company whose vile body count is climbing. It takes three attempts on Harlow’s life and her emerging history to make him question whether she’s on his side of this battle. He knows she’s keeping secrets but maybe they’re justified?

Now someone wants her and members of his family dead. Keith has a few pithy suggestions but so far the bad guys aren’t listening. Whoever they are…

***If you like your romance sweet with a side of suspense and wonderful characters, start reading Nerds in Force today! Keith and Harlow soon learn they’re both seeking justice for those lost and working to keep everyone alive. Falling in love isn’t a part of the plan. 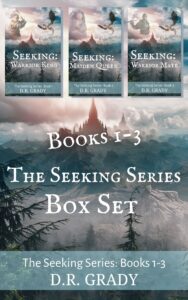